thanks ill have a look
P

my baby not working as she should.... i took off the exhaust and it started to miss. what to do :ep91:
S

And my car is currently at RaceTech with a similar issue, should of went forged lol

ill need to get my camera out iv got a good few engines that have taken a major pounding with blocks near in half !
M

i blew my 4efe up a month and a half ago! was an idiot and screwed her in 1st gear with 4 in the car while very low on oil bye bye big end bearing, there was some deafening knocking .. 235,000kms on her decided to get myself a 4efte happy days

WHAT YOU ARE THINK BEST IDEA TO FIX THIS? BUT I CAN"T CHANGE CON RODS NOW.. NUMBER: 4 BIG END BAD NOISE ONE..

I had same problems with my glanza but i was lucky that it didnt damage my crank or shell bearings! I started stripping it one day because it was over boosting and going into limp mode. Only cool thing when it hit over boost it shot blue flames out exhaust and looked mint lighting up back of car like anti lag lol. I changed head gasket, head and exhaust manifold been goin fine ever since! Bring on the vtecs haha
C

Here is the hole in the side of the crankcase i have been on about in another thread :'(

shorty after my first forged 5e setup i fitted and oil cooler and thermostat, but the stat i bough had no in/ou direction so i tried my luck thinking 50% chance, and damn i gotit wrong no oil pressure and started knocking almost instantly, anyway stripped apart new bearings, tollarences all fine and no scoring, about 10k on the forged 5e now.

but here is my latest,
first is the gearbox, c56(glanza gearbox) and roughly 330bhp - accelarate from 2 into 3rd, top end of 3rd gear it just seem to sheer the gear straight off. the only abnormality was i had about 130kgs in the boot (a spare mx5 engine) which will lead to my next demolition in a moment, but i can only assume that the extra weight in the car caused strain on the gearbox and insted of wheelspin i would usual get, it transfered into more traction and more strain on gears.

and now ill let these pics speak for themselves but basically mx5 1.8 engine - bone stock internals running 17psi on td05 16g turbo, i had run this setup for just over a year but on a VERY cold night i hit the limit of what the stock rods could take( about 260ibft):

gearbox from gt check out the metalic oil lol ( i did about 600miles with it grinding like fook as i really needed to use the car, but obviasly i had no 3rd gear, then eventualy 4th broke too lol

and the mazda engine:

Dropped a rod on Cyl 3

What type of knocking? I have a knock comming from bottom end, not on idle it's more pronounced when feathering the throttle. If I unplugg the ht lead on piston 4 I believe (next to cam belt) it stops!? Haven't had chance to take appart yet just wondered if sounds familiar?
Cheers Oscar

OscarstarletgtTURBO:) said:
I have a knock comming from bottom end, not on idle it's more pronounced when feathering the throttle. If I unplugg the ht lead on piston 4 I believe (next to cam belt) it stops!?
Click to expand...

More than likely you have a worn rod bearing on No.4 cylinder, removing the HT lead stops the combustion process and relieves most of the load off of that bearing, hence the reason why the knock goes away when that cylinder isn't firing. When one rod bearing is worn the chances are the remaining rod bearings and most likely the main crank bearings are not far behind. Depending on the mileage the engine has covered this will be a result of a poor service history or low oil pressure. If it's the latter then new bearing shells won't cure the problem, the oil pressure issue needs to be addressed first.

A bottom end bearing knock is not something you can ignore until you have the chance to deal with it, if any of the bearings fail it'll cause serious damage to the crankshaft. If you get this dealt with now then it may only cost you a set of bearing shells, if you leave it until something finally lets go the engine may even be too damaged to be rebuilt.

first engine fail was due to oil starvation, going a roundabout a few times and flooring it on the straight.
no oil pressure and this is what happens to the bearings (my own dumb fault)

lessons learned, rebuilt her as new.

in the middle of winter, it was a lovely day and thought to take the turbo out of hibernation and take it for a drive.
however... i made a small mistake and this was the result:
this is the oil that came out of the turbo.... compressor side... 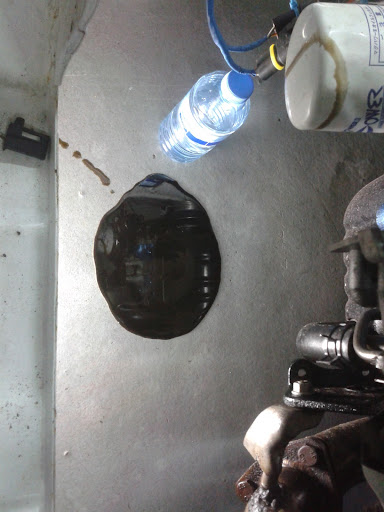 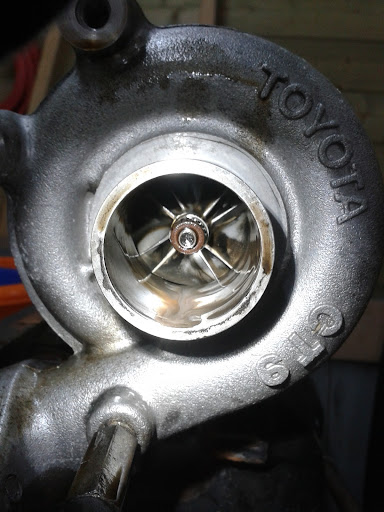 and this was the exhaust side... 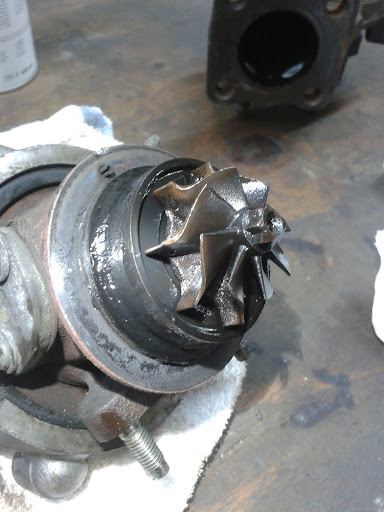 the error i made was my catch can. the leads to the catch can were full of water and it was winter so it was frozen.
the engine could not lose the pressure in the block and the first thing that gave way were the turbo seals and it blew oil into the intake and exhaust.
took the turbo apart, cleaned it, checked it, nothing was broken 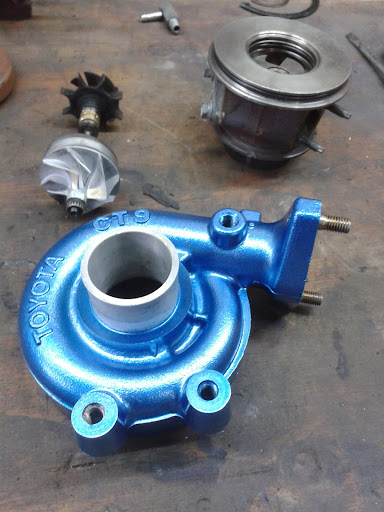 was driving her quite fiercely, overtook a car, floored it, had a bit of a boost spike according to my SAFC (1.1 bar) at 7100rpm, rod went bang...
lots of smoke, lots of unhealthy noises as she died on me.

so after dragging her back home we started taking her apart 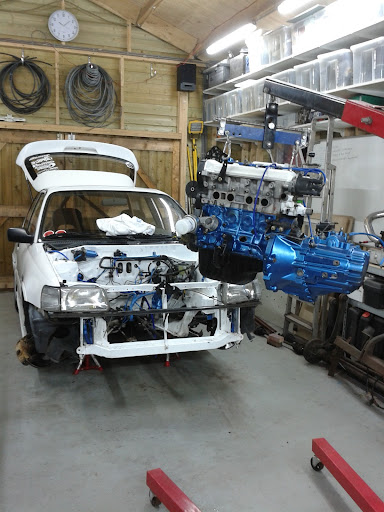 rod made a new hole 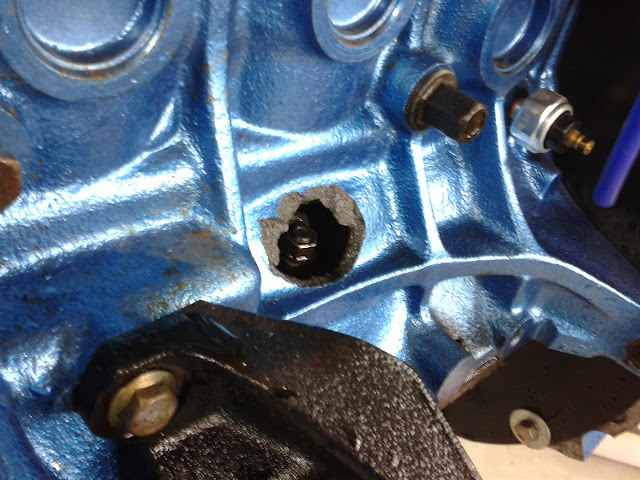 that side of the rod is supposed to be down 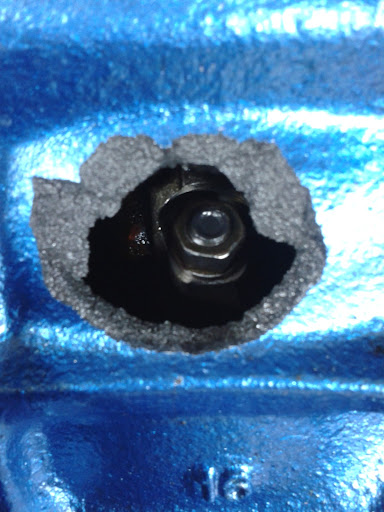 the rod also made an air hole at the back... 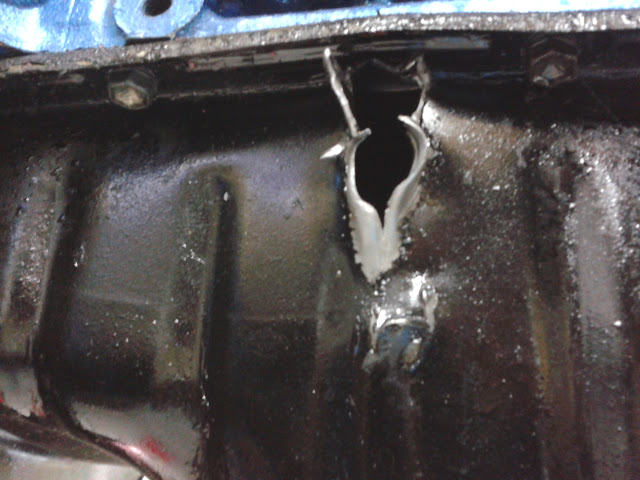 then we removed the sump to see what horrors awaited us
as expected the 3rd rod was snapped, and has made quite a mess of things 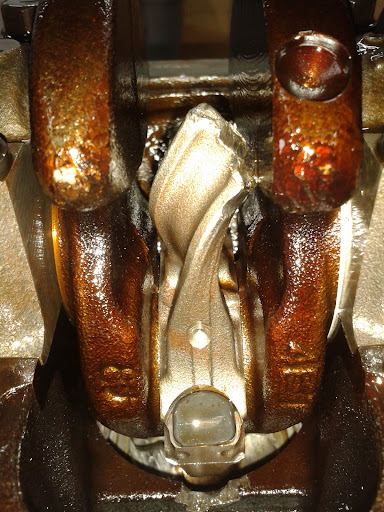 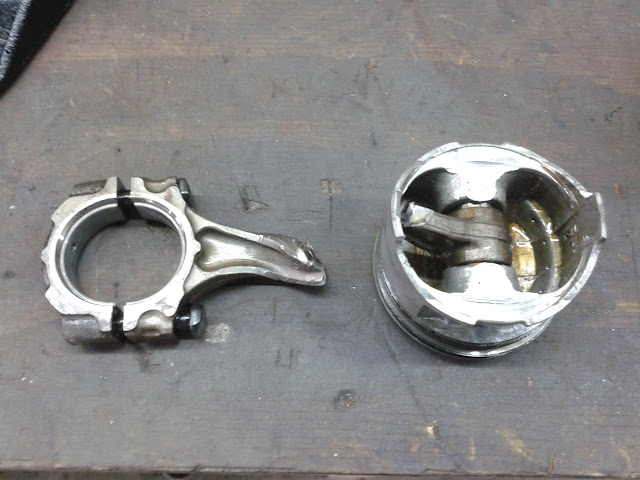 i'm a very very lucky person as the crank is undamaged! not a scratch on it and still rotates freely. will have it measured just to be sure.
all the bearrings were in perfect shape, no damage to the crank or block at all.

good info, do you think this caused the engine failure?

im not sure this is the best way of advertising your turbo? SO GOOD IT'LL BLOW YOUR ENGINE.