Hi guys,, I think I'm having issues wit my TPS sensor being configured wrongly, the sensor is screwed on the throttle body far all the way to the left, there is no space in between the screws to the left, I have not diagnose it yet but I'm having symptoms related to it, car judders when gear change, in the morning when start it shuts off right away until I press the acceleration it stays on then it will idle. car shake when hard acceleration. Anyone experienced same. Need help.

Sounds like it could be the issue. You will need feeler gauges and a multimeter to calibrate it. Theres a thread in the awesome section by wee John that covers it.
B

I have seen this thread i will need to get a feeler gauge and set it right, cuz this is a Glanza V engine swap in an EP82. the guys may have swapped the TPS. each time i release the gas pedal the car will shake a bit engine mounts good.
S

I am pretty sure that the TPS does not have a wiper?
Not that this info will help a lot
But from your symptoms it could be a number of things.

"car shake when hard acceleration" That bothers me.
B

car does not shake when hard acceleration, but in the morning when hard acceleration at a small hill in second gear car looses power i have to press the gas pedal lightly. when I start in the morning it will idle at 300-500 like it is going to shut off, car goes back to idle normal soon as i press the gas pedal once and let go. don' know what is the issue really.. the previous owner was running on a standard NA ECU with NA wiring NA dizzy only GT MAP sensor,, the smaller one like on the picture below,.

Ok lets get right to it, this started to happen when i swap the ECU to GT one 4efte, dizzy to the 4efte distributor, added coil and ignitor to the game swap only the engine wiring harness, dash harness still NA,,,NA clock without RPM gauge, Timing set to 12degree,,note" at 10 degree car drive like crap in my country.

Then the ignitor and coil was for an NA starlet car was not revving past 4000 RPM, got an ignitor and coil pack from a 4AGE engine silver top after install cat will rev past 4000 to limiter on the spot. stop getting code 14 (no IGF signal back to ECU for certain seconds).

Now getting this issue when i start in the morning car idles like it is going to stall then if i press the gas then let go it will idle normal. but out of the parking i have to rev the engine high to get moving...after that when the car has gone to a certain temperature it is ok will start right away no hesitation. need help on this i'm about to sell the car.

That sounds like there's quite a lot going on there. Raises all sorts of questions as the 4EFTE ECU is pinned differently to the 4EFE loom. As a result it won't be seeing all the sensors it uses to operate properly.

Calibrating the TPS shouldn't do any harm but it's difficult to know for certain that is your issue.
B

yeah i know,, but ive got a 4efte engine loom also,,only dash loom is NA,,the only wire that i cant figure out where it goes to from the dash loom is the T2 wire from the NA loom, T2 wire does not match any pin on the 4efte ecu..and the other pin is the low boost high boost (already cut the NA loom )
B

what i need to know is what is the role of the Ile up Valve and the vacuum switch above ignitor and coil..? mine seems to be not working as i turn the knob the car's idle does not change a bit...might this be the cause of the starting problem in the morning or whenever engine is totally cold.

what i need to know is what is the role of the Ile up Valve and the vacuum switch above ignitor and coil..? mine seems to be not working as i turn the knob the car's idle does not change a bit...might this be the cause of the starting problem in the morning or whenever engine is totally cold.
Click to expand...

assuming i read that correctly, you said "what is the role of the IDLE up valve" Feel free to correct me if i have been mistaken.

If i recall correctly, a common failure point on GT 4efte engines is the Manifold Air Idle control system, this often gets Blocked By oil and debris/dust,
if you turn your idle screw and nothing happens its blocked Internally in the Throttle body OR severely broken inside, this system relies on a thermostat of sorts that controls the air bypass Via the coolant heat cycle. we have a thread on here for bypassing this, it can also be Already bypassed causing this issue as well.

Possibly someone could have bypassed your Idle Air pump, OR its blocked Up OR it could be broken due to undue stress from lack of cleaning. it is connected to the left of the intake manifold.
B

good info bro,, but i am talking about the one that is bolted on the firewall below the wiper motor,,that has vacuum hose connected to the throttle body,,,i think it plays a role for the AC system too. there's two valve a green connector and a black one.

blueturd said:
good info bro,, but i am talking about the one that is bolted on the firewall below the wiper motor,,that has vacuum hose connected to the throttle body,,,i think it plays a role for the AC system too. there's two valve a green connector and a black one.
Click to expand...

Alas My vehicle Lacks AC as a previous owner thought it was a good idea to remove it, the only part i know of on my car in that area is the Fuel Vapor cannister Pointed to in this photo. it helps burn off Excess vapor. 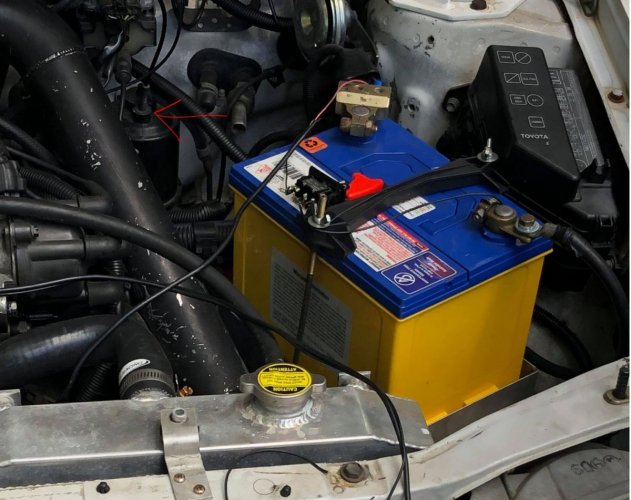 yeah the canister i have it installed,, see pic below,,i can see you do not have those,, so what is there on your throttle body where those hose connects to,, is it blocked.?

mind pasting the part number visible in that image? that will help determine what i am missing, But also, i believe its the Vacuum Fuel Solenoid, basically A very simple re-circulation system for Fuel vapor For emissions compliance. this system can largely be deleted While maintaining the charcoal canister and line, as removing that " charcoal canister " ( depending on your country and local laws ) can be quite illegal
B

ok guys..i think i know now what the issue is...i think i have a low fuel pressure problem.
on startup in the morning it will idle very low and turn off. have to start the car twice. i noticed last time i changed the fuel filter there was no pressure in the fuel line.

now i ask someone to help me out took some pliers and squeeze the fuel return line, and then i ask the other person to start the car, car idles perfectly not even going to stall. now when driving if i go fully open throttle the car will shake a bit then accelerates slowly but not instantly,,i have to drive the car by pressing the gas lightly..
S

yeah i think it is..at times it will backfire when shift from first to second only. i already ordered a 255lph pump from tuning development waiting on it to see the result.
B

if problem still persist then i will have to check the fuel pressure regulator.

Chuck a filter on too for all the price of them, my line was twisted under the filter so had to make a command use some fuel hose
B