I was always wondering those questions.....

Did a bit of research on this area a while back and uncovered these figures on Starlet sales from 1999 : 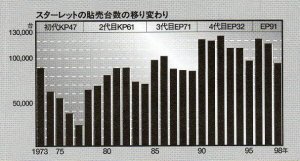 You'll note it doesn't include the 1999 figures as it wasn't over at that point. Given the volume shown I'd say the totals mentioned are for all models. I couldn't find anything Turbo specific.

The chassis numbers are a little weird. I spent some time messing about with random chassis numbers on the Toyota electronic parts computer (EPC) which can pinpoint production month and year of a vehicle. The GT starts off pretty low but it's not as simple as EP82-0000001 being the first GT off the production line. There were many early production vehicles that were used for testing purposes. The lowest I've seen locally is three figures and she was a Dec 1989 GT so that's a good indication.

Equally the V's last chassis number was proving difficult to trace as it could have been anything. The EP91's don't seem to have low numbers from what I've seen.

Suppose the only way is to start a register and log chassis numbers and we're a decade away from that I reckon. It's not safe to dish out a chassis number online either unfortunately.

Very interesting Jay! Good info!
May be you will be able to find out how many UK spec starlets were sold in the UK??? I believe it would not start for 0 000 000 1 - they must have had some testing vehicles and sort of sample cars and they all had VIN numbers -)

A 4+ year bump just as it's a topical subject at the moment on ukso.

Remember kids don't give your chassis number out online for security reasons.

Worst case - Someone could come with their own key!

Looking at this with fresh eyes (and a half hour to kill) I'm counting a total production run of 595,333 EP82's being made over the three 'marks' between Dec 1989 > Dec 1995. Hard to tell how many GT's are actually amongst them but I've spotted the important ones:

Lord you would love to find the first and the last ones huh?

Apologies for any errors or omissions, it is late and it's been a long day!

Very interesting bud, be interesting to know if any of those individual motors have a) come to NI, and b) visited The Costa Del Vogie over the years.

It certainly would, something to investigate when I get a chance. The first GT could be the one used in the brochure or one of the press cars. No definite way to know but it's a nice thought!

Also note Jay, they also sold NON-GT EP82 Starlets for the JDM. So those figures may also include those models. But as you say not as easy to separate.

Calum122 said:
Also note Jay, they also sold NON-GT EP82 Starlets for the JDM. So those figures may also include those models. But as you say not as easy to separate.
Click to expand...

That's what I stated - the production figures cover all EP models.

GT models would account for a small percentage of these, I've identified the first and last turbo chassis numbers of each phase but outside of this exist Soleils, S's, diesels, etc.

For example chassis 107 is the oldest GT recognised but second to a super-red Canvas-Top (chassis 106).

It's conceivable that these are the two featured in the brochure or it could be pure coincidence.

Since we didn't get the EP82 over here did we?

The graph just states number of starlets sold so I'd imagine those are overall vehicles produced (EP80,81,82,85) worldwide (remember even UK EP80's were built in Japan).

Toyota UK quote "By the end of 1998, 1,850,088 Starlets had been sold throughout the world" in their History of the Toyota Starlet piece but then also state a contradictory "By the end of 1991, Starlet production stood at 2,333,538 units" which is conflicting.

Hhmm, that's not as many as I would have thought to be fair. Especially on how common the EP91's are. See them everywhere

Finally I have an answer.

Engraved by laser into the wood by Toyota themselves lol.

That is one cool thing to have on the wall!

I have one of the last EP82's being an advance model, which is still sat looking at me awaiitng repair bless him.

That's a fair few then lol, must check mine being a 95

That's actually a cool little musical box made to commemorate the end of the Starlet. Definitely one for the collection

The musical box is a cool find!

Anyone know anything about trim codes on the vin plate? Ive seen a few are FG11 and mine is FH11?